Congratulations! You are halfway through learning the two most fundamental 'blocks' of programming code--Numbers and Strings.

Remember that a string is simply a piece of data (usually words) wrapped in quotes.

In Ruby, we can perform some math-like operations using our friends, the strings. For example, we can multiply a string like so:

In the above example we have a string: "repeat " that we multiply * by three. When Ruby performs the * 3 method it actually just copies the string three times and pastes the result together. Sort of like this:

In fact, you can write either of these lines of code and the result will be the same. Much in the same way that writing 3 + 3 + 3 = 9 yields the same result as 3 * 3 = 9. When the computer adds strings together we call it concatenation.

In the example above, there are two strings, one is "Cat and " and the second string is "Dog". By giving the command to add the two strings +, we are able to join both strings together using the magic of concatenation. (Concatenation is just a fancy old Latin word for join together). 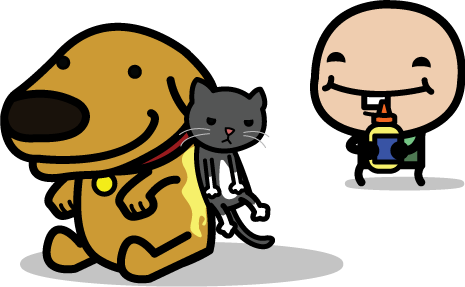 Ready to try it out?

Open Terminal again (or http://repl.it/languages/Ruby) and try multiplying and adding a few strings yourself to get the hang of it.

Now try adding a number with a string. It didn’t work did it? Remember that joker "9" string from our previous example in chapter one? Ruby doesn’t see this as the actual number 9, instead it sees a string.

To Ruby, anything that is inside the quote isn’t just a word or a number anymore. Everything inside the quotes is a string. So when we try to add a string with a number, Ruby gives us an error:

In the above example, we would see "9" + 9 and think the answer is 18. But Ruby doesn’t see it like that. Ruby sees "STRING" + NUMBER. And you can't add strings and numbers, because they are different types of data.

This doesn’t mean we can’t do this sort of equation, it just means we need to use a trick to make sure Ruby understands what we want. Of course, there are lots of interesting methods or actions we can perform to get Ruby to do what we want.

We’ll look at some of those actions a bit later, but for now, you could solve the above problem by using the to integer method, or to_i. This would convert the string to a number (more specifically, an integer). And with two numbers, Ruby can do the math:

Remember those \n characters from the first chapter? This is what the computer uses to note a new line in your string. So the following string:

In this way, Ruby can store sentences or even whole files inside just one string. Now that you have a better understanding of strings, check out some examples on the practice page.